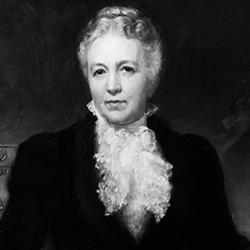 Anna M. Harkness, nee Richardson (1837–1926), who began the Commonwealth Fund in 1918, was among the first women to establish a foundation in the United States. Characteristically, she did not name the foundation for herself, but rather for its purpose: to do “something for the welfare of mankind.”

Anna was always a generous benefactor to social and cultural causes in her native Cleveland. Her giving increased when her husband, Stephen V. Harkness, died in 1888, leaving her a $50 million estate — mostly shares of Standard Oil Company stock. She moved to New York City in 1891 and expanded her giving to medical, social welfare, religious, educational, and cultural institutions.

Anna’s wealth grew exponentially as Standard Oil hemorrhaged dividends owing to the endless demand for gasoline. Anna was besieged with requests for donations. She and her son Edward agreed it was impossible for a single person to evaluate appeals and oversee donations. Their solution was to establish a foundation, which Anna did with an endowment of $10 million. Edward served as its first president.

Anna continued to endow the Commonwealth Fund until her death and bequeathed part of her estate to it. She also continued supporting a wide range of charitable organizations. The greatest beneficiaries of her estate were the Commonwealth Fund, various Presbyterian churches, the American Museum of Natural History, the New York Zoological Society, the Hampton Normal and Industrial Institute, the State Charities Aid Association, and the Tuskegee Normal and Industrial Institute.