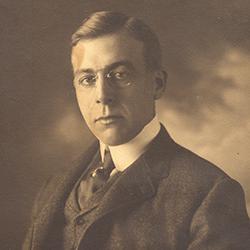 Edward Stephen Harkness (1874–1940), a major philanthropic donor of the early 20th century, was the first president of the Commonwealth Fund. Believing that his inherited wealth was a responsibility to do something for the common good, he donated more than $129 million during his lifetime. His giving, mostly anonymous, was innovative, insightful, and focused.

Born in Cleveland, Ohio, Edward was the youngest of four children of Stephen and Anna Harkness. Stephen was a wealthy investor in banks, railroads, real estate and a majority shareholder of the Standard Oil Company. When Stephen died without a will in 1888, his $150 million estate was divided among his heirs. The heirs moved to New York City, where the older son Charles managed the family’s investments. Edward and his mother devoted themselves to philanthropy. He assisted his mother, Anna Harkness, in establishing the Commonwealth Fund in 1918 and served as its president for 22 years.

In addition to his work and donations for the Commonwealth Fund, Edward pioneered one of the first medical centers to combine patient care, medical education, and research in a single complex. He convinced Presbyterian Hospital to partner with Columbia University, creating Columbia-Presbyterian Medical Center, and donated $31 million and 22 acres of land for its construction and support.

Loyal to his and his wife’s Scottish and English heritage, Edward gave $10 million to establish the Pilgrim Trust in Great Britain for the restoration of monuments destroyed during the First World War. Today, the trust focuses on social welfare programs.

Edward and his wife, Mary, were generous supporters of the Metropolitan Museum of Art in New York City. Edward was chair of the Egyptian Department, a museum trustee, and fellow for life. The family also funded organizations that provided support to vulnerable populations, including the destitute, the elderly, and the unemployed; religious institutions; and cultural institutions, including the New York Public Library, the Museum of Natural History, and the New York Zoological Society.