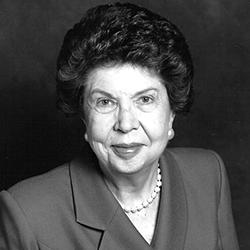 Margaret E. Mahoney (1924–2011), the Commonwealth Fund’s president from 1980 to 1994, was the first woman to head a major U.S. foundation. During her tenure, the Fund focused on improving health care delivery, including for vulnerable populations, and strengthening medical institutions. Among the key programs established were the Commission on Women’s Health, the Commission on Elderly People Living Alone, and the Task Force on Academic Health Centers. In 1986, the James Picker Foundation was merged with the Commonwealth Fund, resulting in the establishment of a patient-centered care program and the Picker Institute.

After graduating from Vanderbilt University, Mahoney served as a foreign affairs officer for the U.S. Department of State. From 1953 to 1972, Mahoney was an executive at the Carnegie Corporation, where she helped establish the Clinical Scholars Program in conjunction with the Commonwealth Fund. The program followed Mahoney to the Robert Wood Johnson Foundation, where she became a vice president in 1972. She is credited with helping to push RWJF to become the largest public health foundation in the United States.

Following her retirement in 1995, Mahoney worked with the Commonwealth Fund to create Healthy Steps for Young Children, an initiative focused on strengthening preventive care for children under age 3. In a memorial tribute following her death in 2011, Mahoney’s colleagues summed up her impact: “Margaret Mahoney’s life’s work was to bridge the gap between things as they are, and things as they ought to be. With that vision, and her drive, she improved the lives of countless Americans who have never even heard her name.”