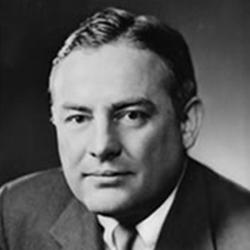 James Quigg Newton, Jr. (1911–2003) was president of the Commonwealth Fund from 1963 to 1976, after having served on its Board of Directors since 1951. During his tenure, the foundation focused on addressing the shortage of physicians in the United States and improving access to health care in urban and rural areas. It initiated successful efforts to create new categories of medical professionals, including nurse practitioners and physician assistants, and supported the first prepaid health care delivery program, the Harvard Community Health Plan.

Before joining the Commonwealth Fund, Newton was a lecturer of law at the University of Denver and started his own law firm before joining the Navy during World War II. In 1947, he was elected mayor of Denver, the youngest person to hold that position and the city’s first native-born mayor. During his two terms in office, Denver created a city planning office, a city budget office, a new library, the Museum of Natural History, and new public housing units. After a brief stint as vice president of the Ford Foundation, Newton returned to Denver and to academic life, serving as president of the University of Colorado until 1963.